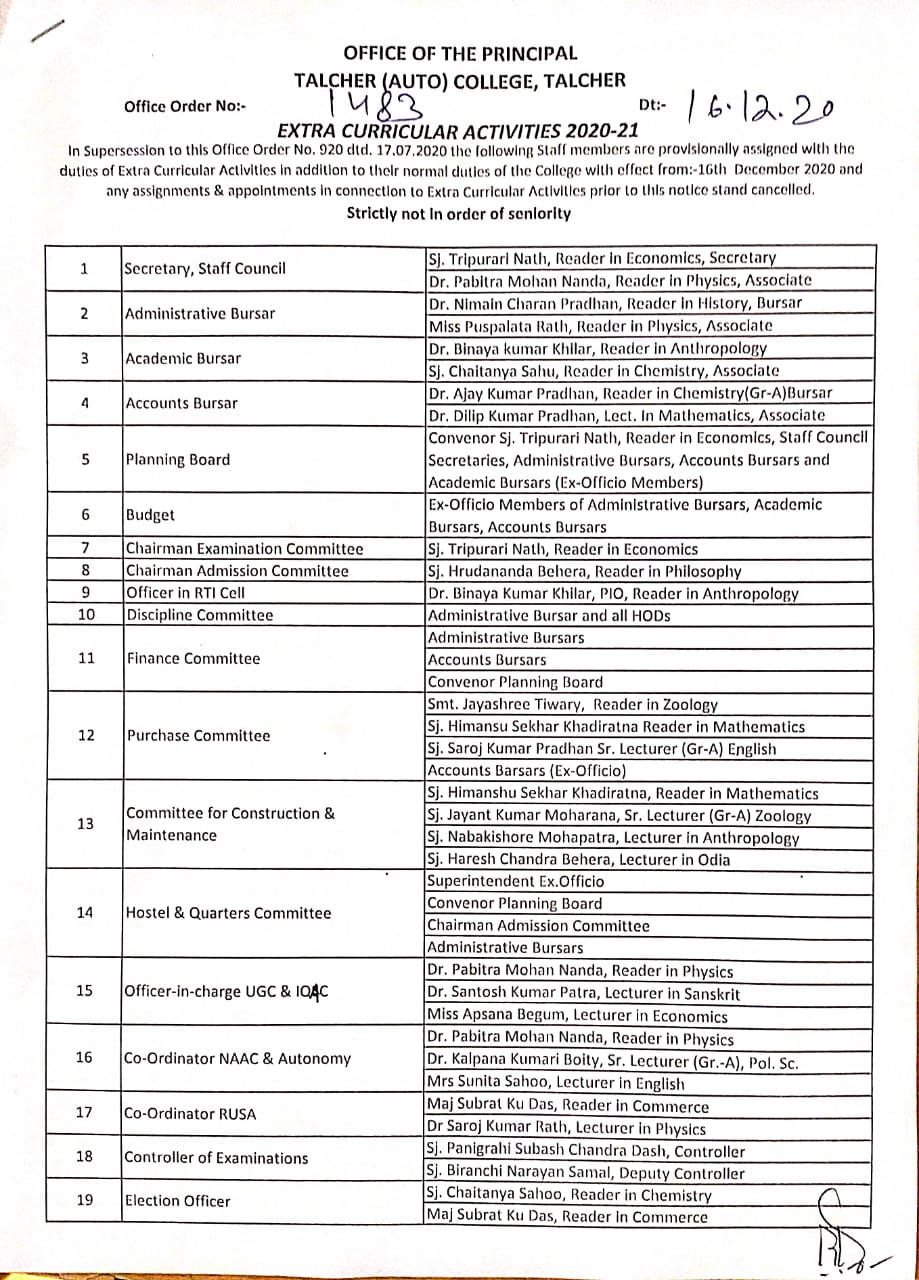 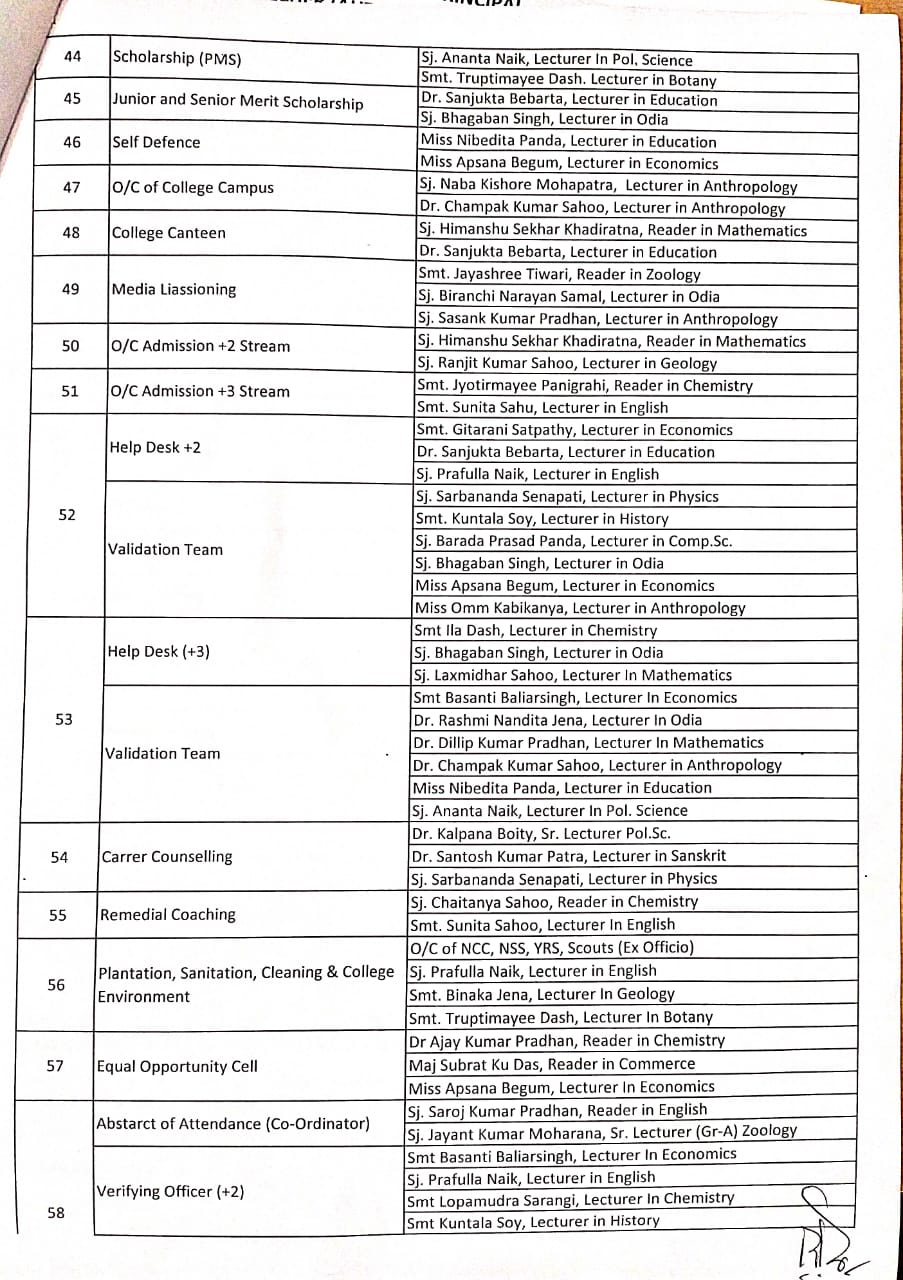 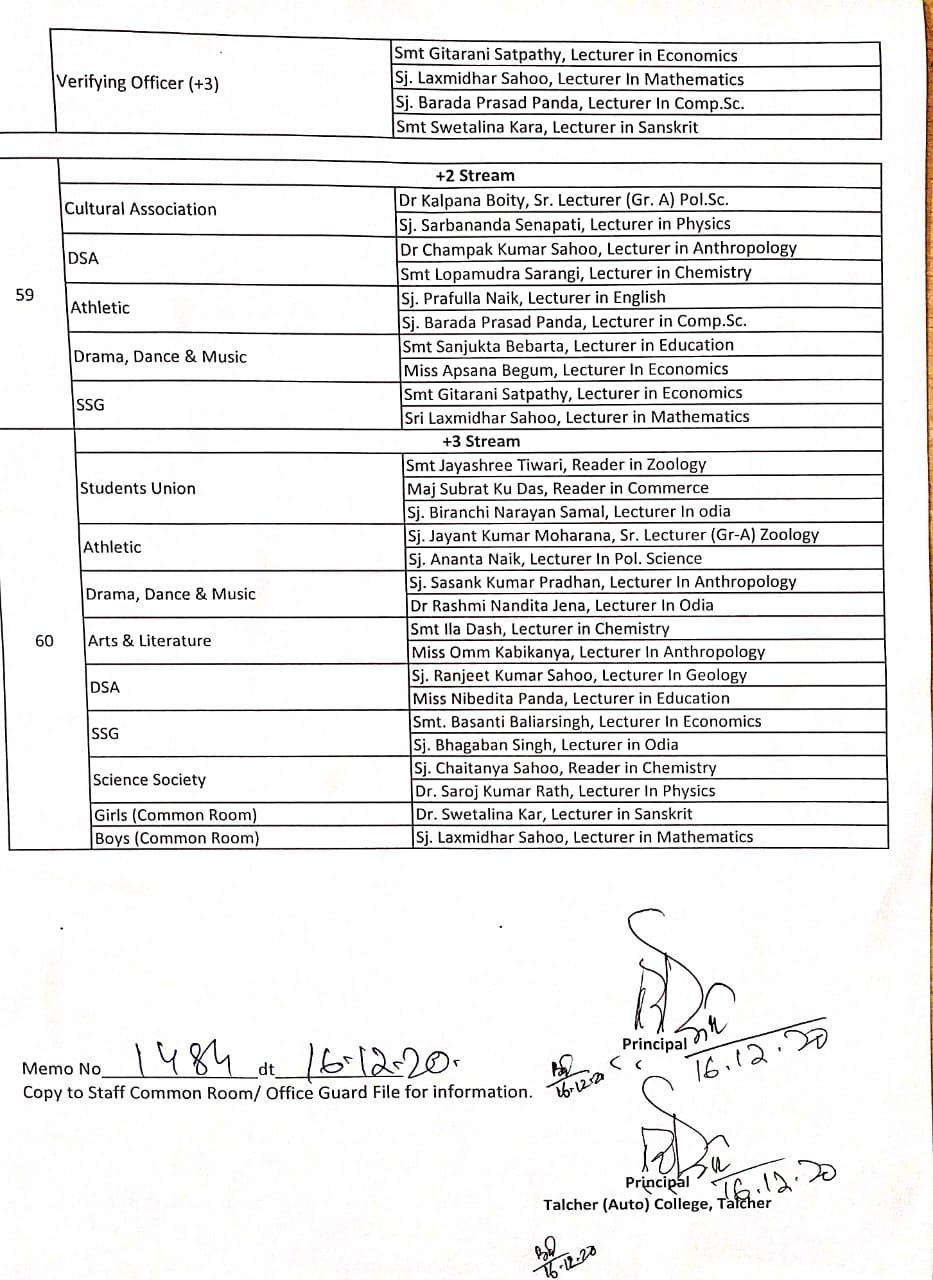 a) The affairs of the College Union shall be managed by an Executive Committee consisting of the following members.
b) The President
c) The Vice- President
d) The Secretary
e) The Assistant Secretary
f) One class representative from each class(excluding lady student).

FUNCTION OF THE EXECUTIVE COMMITTEE:

a) There shall be an advisor and an Associate Advisor to guide the Executive Committee to carry on its activities.

b) The advisor and the Associate Advisor shall be appointed by the Principal from among the members of the teaching staff for one academic year.

c) The Advisor and the Associate Advisor shall be present at the ordinary meetings of the Union. They will advise the Union executive by helpful suggestions, when they think it necessary in the proper conduct of the meeting. The president may also refer to them any rule for interpretation and the decision of the Principal in all matters relating to the matter of College Union is binding and final.

d) The Advisor may at any time during a meeting at the request of the President, explain the scope and object of a motion or amendment.

e) If the advisor or the Associate Advisors are unable to be present at a meeting, the principal may request any member of the staff to discharge all the functions of the Advisor.

f) The Advisor or the Associate Advisor may preside over a meeting when they are specially requested by the President to do so.

Any member of the Union is eligible to stand for the President ship of the Union. The President shall preside over all the ordinary meetings of the Union at which he is present. He shall be responsible for maintaining order and interpreting the rules. His ruling shall be final except where he requests the Advisor to give a ruling in which case the ruling of the Advisor shall be binding.

There shall be a Vice-President elected from among the students. In the absence of the President the Vice-President shall exercise all rights and discharge all his duties.

a) The Secretary shall select a range of debates and notify all the meetings whether annual, ordinary or extra ordinary.

b) The secretary shall select the subject for debates in consultation with the President and the Advisor.

c) The Secretary shall maintain the accounts of the Union. The Advisor shall countersign all the vouchers of expenditure.

The Assistant Secretary shall assist the Secretary in the discharge of his duties and in his absence shall perform all his functions.

Every class is entitled to send one representative to the Executive Committee of the Union.

The election is conducted as per the instructions of the Govt. from time to time.

a. Vacancies of office will arise if (a) the office bearers shall not hold office till the next annual election.

b. They cease to be student of the college.

c. They voluntarily resign in writing addressed to the Principal.

d. They are removed in the manner as prescribed in rule below :

e. An office fails to discharge his duties properly van be removed by a vote of non-confidence passed by 2/3rd of the members present at the voting at an extraordinary meeting called for the purpose.

f. Office bearer who are the University examinees shall be deemed to have vacated their office at the end of their Test Examination. In case the annual day of the college Union held after the test result, the President and the Secretary, if examinees, may be allowed to act as such for that function or any other function preceding that.

g. Any office failing vacant in spite of these arrangements may be filled up by holding a by election.

The fund will be maintained as College Union fund. The accounts will be operated by the Principal and withdrawals will be made by him when requisitioned by the Secretary through the Advisor.

Once in the beginning of each session there shall be an annual meeting to welcome the new members of the Union. The Principal shall fix the date of this meeting as soon as possible. In this meeting the Annual reports of the Union of the previous session will be presented by the outgoing Secretary.

Ordinary meetings of the Union shall be arranged by the Secretary in consultation with the President.

An extra ordinary meeting of the Union may be convened.
a) At the written requisition addressed to the Principal and signed by not less than 50% of the members of the Union.
b) At the request of the President.

MEETING OF THE EXECUTIVE BODY :

The quorum of the executive body shall be 2/3rd.

The Secretary shall cause a notice to be issued two days before each ordinary meeting containing date, place and agenda of the meeting

AMENDMENT OF THE MOTION :

a) Notice of the amendment must be put into the box reserved for that purpose by 12 noon on the date preceding the date of meeting.

PROCEDURE IN THE MEETING :

a) In the absence of both the President and Vice- President in an ordinary meeting, the members present shall elect Chairman from among themselves. The Advisor or the Associate Advisor shall take chair until the election is over. The Chairman shall assume all the right and discharge all the duties of the President during the meeting.

c) Every speech shall be relevant to the subject or debate of the amendment proposed. No personal reflection shall be made in course of the meeting.

d) No member other than mover of a motion shall speak more than once in course of the debate. At the conclusion of the debate the mover may at his option reply to the debate.

The president may, if he so desires take part in the debate and the Vice-President or in his absence some one else, at the President’s request shall take the chair.